I published an opinion piece in Scientific American (May 3, 2021) about European starlings where I touch on topics such as: the lack of evidence for the Shakespeare connection, damage to farms, disease spread, the privilege of park going, and the health benefits of spending time in nature (with birds):

What a weird year it was, but things were pretty busy on the starling front and I wanted to share a few updates:

1) We published our Starling Mitochondrial DNA paper in Ecology & Evolution:

2) The journal kindly asked us to write a blog about our paper!

3) Our work was featured in Forbes!

4) We spoke about our research at the American Museum of Natural History’s online SciCafe (video recording available upon request):

5) I was featured on the College of Mount Saint Vincent website:

And because we have no shortage of birds, or ideas, stay tuned for more to come...

I am finally getting around to reading the book Mozart’s Starling by Lyanda Lynn Haupt.

It is a well-researched, deftly written account of starlings, and focuses on two individual birds in particular. One, a pet starling kept by Mozart himself. The other, the author’s own pet starling that she raised from a chick. I cannot deny that her lovingly detailed account is making me want a pet starling more than anything. Because then, I could be learning from them all the time.

One excerpt from the book really struck me. It perfectly sums up the complexity of the relationship with these birds:

“Starlings are shimmering, plain, despised, charming, collectively devastating, individually fascinating. We have the capacity to realize that while a species may be ecologically undesirable, the individuals of the species are just birds. Beautiful, conscious, intelligent in their own right. Innocent. Do I want starlings gone? Erased from the face of North America? Yes, unequivocally. Do I resent them as aggressive invaders? Of course. And do I love them? Their bright minds, their sparkling beauty, their unique consciousness, their wild starling voices? Their feathers, brown from one angle, shining from another? Yes, yes, I do. ”

A short radio piece where I refer to European starlings as “bad asses”, for their adaptive flexibility, dispersal and expansion, and all-around industriousness. Not to diminish the seriousness of the threats they pose to native species, crops, livestock and airplanes - but just to say, they are biologically amazing, and don’t seem to care that they aren’t loved.

See our research featured in Mental Floss at the link!

http://mentalfloss.com/article/502358/scientists-study-starling-invasion-unleashed-america-shakespeare-fan
Posted by Julia at 12:24 PM No comments:

learning to be a starling

It’s that time of year. The early summer, filled with wholesome expectations and tinted with the soft pain of change. The young starlings are out of their nests and on the city sidewalks. I saw one tweeting madly this morning, alone on a black metal fence. They are a modest deep grey now, unlike their more colorful, ostentatious parents. They look surprisingly large-bodied and grown up, especially for only 25 days old or so.

This year, for the starling project, the students created some truly beautiful bird skins. By that I mean they gutted the birds, turned the skin inside out, removed remaining bits of flesh, filled their body cavity with cotton, sewed them back together, and rearranged the plumage until they were returned to a bird-like body form again. This procedure is done to preserve the bird skin for future research purposes. Ornithologists who know how to do this, really know how to do it, but most people in the world, don’t. The process resembles cooking boldly and then carefully (but not eating), mending a ballet slipper, and petting a flower without losing petals. It requires a toughness, but also an extreme gentleness.

We could not have anticipated how much our students would excel at this new, sometimes disgust-inducing, precarious art. But they did.

The birds for our project are culled from airports, so they don’t fly into aircraft. Approximately 2 million starlings are killed this way every year (though this hardly puts a dent in the population of ~200 million in North America). Depredation methods range from trapping, cervical dislocation, and sometimes gunshot. Our birds this year had tiny holes in their skins from the latter. The students ever-so-gently mended the micro-tears in the skins. It would have been easy to: 1) give up. 2) make the mistake of creating a larger hole by tugging the delicate skin. But they didn’t. 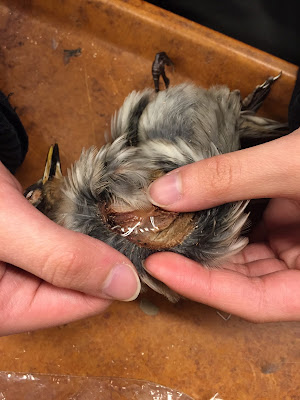 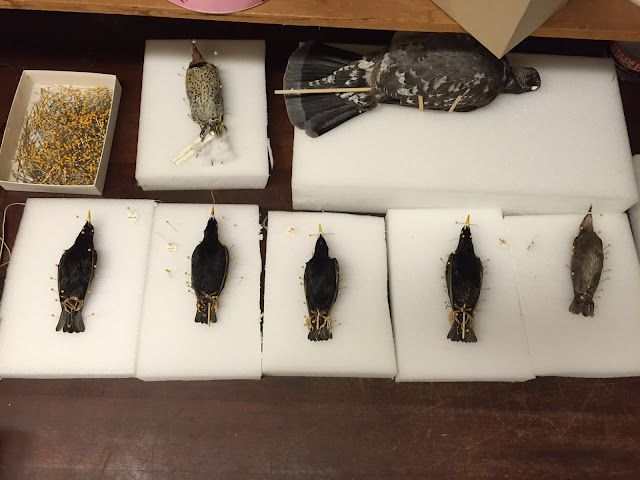 The juvenile birds in particular, have slightly thinner skins than the adults (see image above, and the bird all the way to the right in the bottom picture). I love the idea of the students mending the young birds, and learning to be scientists. And I love to see the juvenile starlings, out of the nests now, learning to be starlings.
Posted by Julia at 11:04 AM No comments:

The range of European starlings in North America extends northward to Alaska. We think this range is the result of the 1890 introduction (i.e. invasion) of these birds. The native range of European starlings spreads across Europe and Asia, stretching as far East as Mongolia. Soon we will receive modern birds from Alaska, which made me remember a good question from a student a few years ago. Did starlings arrive in Alaska from their southern invasive range, or from their native range to the west? European starlings are not traditionally regarded as migratory birds. That means they do not fly over long distances seasonally to breed, though some starling populations are exceptions to this. But European starlings have been experts in rapidly and permanently expanding their range. So, some starlings go back and forth, and some just go forth.

The movement of starlings across the Alaskan landscape reminds me of a recent study about early human migrations. Though by feet not flight, humans may (or may not) have traversed a similar path, and with similar rip-roaring gusto. The traditional story is that the first humans arrived in North America across the Bering Straight from Siberia via a now long-gone land bridge. Some scientists have recently suggested that although the land bridge was present 13,000 years ago, the conditions in the region would not have allowed humans to survive (Pederson et. al, 2016). The landscape was barren with no exploitable resources for food or shelter. It was the Ice Age after all, not exactly a time of warmth and abundance. The authors go on to say that perhaps humans arrived via a different, unknown seafaring route. No matter which route they arrived, I always think of those first migrants. Human migrations did not complete themselves within the lifetime of one individual. But that does not mean that brave explorer types did not exist thousands of years ago in the human population. Undoubtedly, these individuals would make Columbus and Darwin look like wimps. The world was wilder then. Imagine going out in the morning and not knowing if continuous land lay ahead? or if you would find familiar food? And you would be a prisoner of the daily cycles of light or dark, and of the unusually long days, or continuous Alaskan nights. It makes my risk-averse body shiver.

A unique quality that humans have, that separates us from other species like birds, is that one individual can have an impact for years to come via the cultural transmission of information for generations. We have key people throughout history who, for better or worse, leave a mark on the population. Then, generations later we remember that person. But was their a starling Elvis Presley, or an Abraham Lincoln starling? The answer is no, but also kind of yes. We do see a few individuals that lead what we call the expanding front of birds. These are the birds on the edge of the group that led the species further into new localities. What was it about those individuals that made them fly farther in a new direction than any starling had before? And maybe the movement wasn’t very far, just a few new miles within their lifetime. They also didn’t know they were explorers. They weren’t leaving a flag in the ground or posing for grainy photographs, they were just eating different caterpillars and living in a new old tree. We can measure their wings, legs, bodies, and learn something about the geographic distribution of genetic diversity to understand more. The answer for why they moved is probably food or safety. This is likely the same reason early humans moved too. No one was running from war or towards religious freedom. Yet. But the new question is how did they adapt to new environments so well? Among hominins, we credit Homo sapiens with the astonishing capability to adapt to new highly varied environments. But the story of European starlings in North America is also one of amazing adaptive flexibility.

In humans, a specific genetic variant of a dopamine receptor gene called DRD4 has been linked to “novelty seeking behavior”. People with the shorter version of this gene are less likely to explore, and those with longer versions are more likely to explore. Some authors have suggested this allele played a role in the behavior of the original human explorers (Matthews and Butler, 2011). In birds, a specific genetic variant of the ADCYAP1 gene has been implicated in seasonal migratory behavior (Mueller et. al., 2011). But we know birds, just like humans, expanded their ranges too. Who were those first starlings that went forth into Alaska and didn’t go back? Why did they go? How did they adapt? They were not what we should call brave, but they were almost certainly, different.